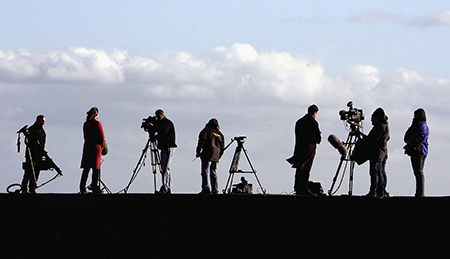 The Overseas Press Club is deepening its commitment to freelance members in need of financial support during the COVID-19 pandemic. In early September, the club awarded grants of $750 each to 22 freelancers.

The OPC initiated the grant program in May, when it gave $750 grants to 27 freelance members. In total, the club has awarded $36,750 in microgrants to 49 freelancer journalists this year.

“I am incredibly grateful for the OPC’s continued support during this pandemic and beyond,” said Leila Barghouty, who joined the OPC in 2015 after finishing a graduate journalism program at Stanford. “This grant will make it possible for me to continue to safely cover these historic protests and America’s long overdue race reckoning, along with its global influence.”

“OPC’s dedication to globally impactful reporting, even when travel is impossible, is what’s allowing me and other freelancers to tell these stories,” Barghouty added.

Jacqueline Muniello said the OPC grant “will help support my work covering the impact of coronavirus in Mexico with a focus on women and the LGBTQ community.”

Joseph Snell will use the grant for a book he is writing about the spread of Assyrians around the world. “Assyrians are an ethnic community indigenous to Mesopotamia who have faced pressures in the past decade through a string of wars and ISIS to leave their homelands. Today, millions of Assyrians are fighting to keep their cultures alive while assimilating into their new home nations,” he said.

Other programs initiated by the OPC in recent years to help freelancers include subsidies for annual dues and the OPC’s annual awards entry fee. In 2020, the OPC gave out $5,700 in award entry subsidies and $830 in dues subsidies.

“As more news outlets switch from salaried foreign correspondents to freelance writers, editors, photographers and videographers for their foreign news coverage, the more the OPC hopes to step up and support the work of journalists abroad, whether they have fulltime posts or temporary gigs,” said club secretary Paula Dwyer.